I luuuuurve Dim Sum!  Yum Yum Yum in my Tum!  It was one of those treats I remember as a kid that we had every now and again in Chinatown.  I think I've probably been FOUR times in the past month as my Dad is over from Hong Kong for a while.  I'm not complaining though!  :0D  I often drool at blogs where people review their dim sum treats and the restaurant they visited.  Well, I'm not a dim sum connoisseur by any means but I thought I'd engage in some photo posting to make you all droooooool over your keyboards! Heh Heh Heh!  Mean aren't I?


This was the first dim sum outing I took Dad to.  I was excited to hear of a new Chinese Restaurant opening in Watford, Hertfordshire.  Even more so when it was a restaurant with dishes aimed at Chinese people, not western palates!  It does dim sum too!?!?!  RESULT!  It has a sister restaurant in London's Chinatown and I've yet to sample the fare there but I've read that it's good.

Imagine my horror when I discover the Watford site has a two-tier pricing policy!?!?  Monday to Friday is the first price banding and not cheap either for that matter!  Weekends you will be expected to pay around 40p-80p more on your dim sum dishes!  Making a list of items we would normally order if having dim sum (just myself and Mr Leaf), it worked out we would spend £10 more if we ate there at weekends!

Luckily, Mr Leaf gets a 20% reduction on his bill by working in an office near the new restaurant.  It brings the bill in line with what we pay at our regular dim sum venue.  On our visit there, Mr Leaf was particularly pleased as after I submitted the dim sum tick sheet, I gave him a call and he took that as his cue to leave the office.  He took his lunch break and joined my dad, (Mr Plum) and myself for dim sum lunch.  This means less of his lunchtime is taken up by waiting for food to arrive.  Cunning.

There is a good selection of dim sum delicacies on the menu (a laminated picture sheet with letters by each dish as well as Chinese and English names).  The tick sheet is two-sided.  English on one side, Chinese on the other.  All items correspond with the lettering on the photo menu too.  Here's a link to their menu so you can have a good drool there too! :0p

Food wasn't too slow to arrive and was tasty enough.  The skill in making the Baked Shredded Turnip Pastry '千絲蘿蔔酥' was good and the filling was nice but perhaps lacked a certain oomph.  It was served lukewarm and was a bit oil-laden.  It should be described as Deep-Fried, it was no way oven baked. The Crispy Dough Cheung Fun '蔥花炸兩腸' was served with soy sauce separately - a nice touch I thought.  The dough stick was crispy but did taste of old oil.

My absolutely favourite dish was Pork Dumplings with Vegetables '菜甫鮮肉菜餃'.  One bite into these cute dumplings (I think they were supposed to look like Green Pak Choi!) revealed a juicy filling.  I tasted dried shrimp, Chinese mushroom and some preserved radish.  So flavoursome and memorable!

I would visit again but only on a weekday and with Mr Leaf so we could get the discount too.


*** NOTE:
...and I won't blog about such tasty delicious dim sum delights at silly o'hour as it's made me hungry and I REALLY crave dim sum right now!
Posted by PlumLeaf 李葉 at 1:51 am 6 comments:

*** APOLOGIES: I started this post with the intention of finishing it after Boxing Day and posting it.  I was worn out from the festivities and totally forgot this was in my Draft folder! *** 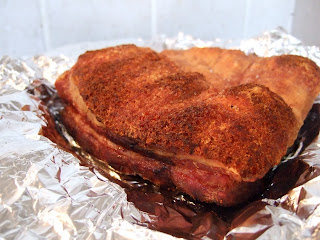 On Boxing Day we revert to Chinese dishes and we usually have crab/lobster in spring onion and ginger sauce as well as other luxurious goodies.  This year we also had steamed scallops with bean thread noodles and garlic.  Last year (2009) I made a contribution to the meal as I thought seafood was off-limits for me as I was pregnant.  I now realise that most seafood is okay if cooked thoroughly and served hot (with the exception of large fish like shark, marlin and limited amounts of tuna as they can contain high levels of mercury.).  I decided to make Chinese Crispy Roast Pork as I (thought) couldn't eat the prawns in tomato sauce, or lobster we were having.  As that was so well received I thought I would do the same again this year (2010).  Only half of the skin puffed up so it was light and crunchy.  The otherside was dry and crisp but not that light bubbly crunch.  Still, it was yummy! 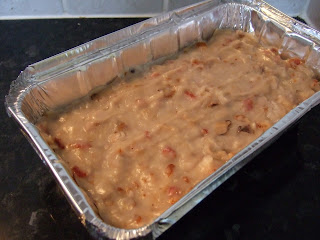 I also made steamed taro cake.  First time I had made this and it was okay.  Not particularly outstanding.  I think I will make steamed radish cake in the future and make sure it has plenty of tasty bits: dried marinated pork belly strips, dried sausage, dried seafood, dried mushroom.  I'll fill it with so many goodies they will be no room for radish and rice flour!
I was thoroughly worn out after my manic Boxing Day baking, roasting and steaming!  As soon as Mr Leaf was back to work I had a peaceful, lazy day with me and the baby and enjoyed a nap (?!) from 5pm to 8pm one evening!  Hubbs saw we were both asleep when he came home from work and didn't wake me.  He had to get his own dinner - he had instant noodles!  (I had to make myself a baked potato when I woke up!)
Posted by PlumLeaf 李葉 at 12:07 am No comments: