I made 2 birthday cakes in the space of a week!  The first was a chocolate chiffon, the second, an orange chiffon with fruit and cream.

My manager at work has reached a milestone birthday and asked if I would make a cake for the occasion.  I had every intention of making one anyway, but he insisted that he would pay me to make the cake!  Well, I couldn't say "N-o-o" could I?  It was so that it could be eaten at work with fellow colleagues.

This is the creation I came up with.... 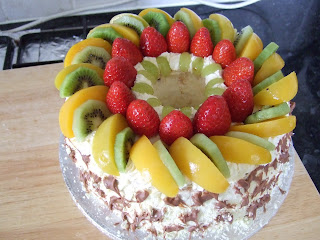 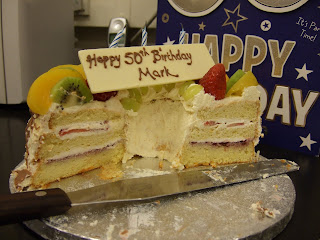 Cutting the three layers was a little tricky and it seemed uneven in places but once it was sandwiched up and the sides hidden with cream, white choc shavings and milk chocolate splodges, it was fine!

It was beautifully light and moist and certainly very moreish!  My manager was very pleased with his cake and even had to confiscate it at one point in order for there to be something to take home for his family!

I'm delighted to have come across chiffon recipes and know they make beautifully light, airy, pillow soft cakes that melt in mouth leaving you wanting more!  I'm hoping that I get more requests to make cakes from my work colleagues in the near future!
Posted by PlumLeaf 李葉 at 11:03 pm 3 comments:


It was my birthday on Saturday and we were away on hols - Cornwall.  We were fortunate to have sun for the duration but if we'd had our way, we would've been soaking up the rays on the sunny mediterranean island of Cyprus.  With the hoo-hah about the volcanic ash cloud having over Europe, we were grounded like the planes.  Luckily we were booked on a package deal and were able to get a full refund.  I was bitterly upset as it was to be my our last holiday abroad for a little while as I am now 25weeks pregnant with our first baby.  I'd even arranged for my mum to have time off with us - she very rarely takes time out from the take-away so it was going to be an extra special holiday too!  Still, we managed to get a break for the duration of the time off we'd booked from work so it wasn't all bad.

However, on my return to work, I'd promised to bring in a joint birthday cake as it was my birthday on Saturday, and a colleague's on Monday.  I'd decided it was going to be a chocolate chiffon filled with raspberry cream. 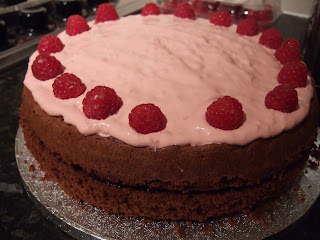 I was really pleased with the outcome as I wasn't confident a chiffon cake would rise properly in a non-stick cake pan that didn't have a central tube for the cake batter to cling on up.  It rose well and even stayed in the pan during cooling.  The raspberry cream was a bit on the soft side as I should have beaten it to stiff peaks before folding the raspberry puree through it.  It wouldn't stiffen further after that point.  Nevertheless, I sandwiched the layers with raspberry jam and the raspberry cream.  It was topped with more raspberry cream and decorated with raspberries.

It was devoured by my work colleagues and I even managed to get a slice myself -as well as making sure I took a wedge home for my hubby! ;0)

It's a fantastic recipe and the result is a very light cake with plenty of bubbles and is moist too!

I'm busy baking again in the kitchen today as it's my manager's milestone birthday tomorrow and he's asked me to make a cake for work!  I'm baking an orange chiffon and it will be decorated with cream and fresh fruit.

I think Spring has arrived!  It's certainly been warmer this week and now the daffodils are in bloom with their sunny yellow cheerfulness!  The crocuses aren't much to chase away the winter blues but sunny yellow always brings happiness to me!

With this warmer weather it's also time to think about getting into the garden - tidying it up, pruning, digging, planting.  All things I can't bear to do if it's cold, wet or windy outside!

When we first moved into this house I was keen on growing my own veggies.  Did not attempt much in our first year.  Our second year led to the construction of two raised beds for veggies.  Last year, I started gardening in all keenness and enthusiasm.  By late summer interest with the garden had waned as I discovered a new hobby - craft workshops.  They are mainly around card making in different forms, stamping and embossing mainly but I have learnt parchment craft and beading too.

Was looking forward to an afternoon of beading today (we learnt to make a lovely bracelet in class yesterday.).  Hubbs had mentioned how nice the weather was outside and I figured I'd best go out and get my free fix of vit D.

We keep three chickens in our back garden and they are garden destructors!  They nibble most things green - which is fine if they only stuck to grass but they ate the tulips last year and we did not get a single flower!  They also dig and scratch the flower beds so there are bark chips and soil in all places but the borders!  After sweeping the patch I thought I'd set to work on the veg beds.  I dug over and raked these about 3weeks ago.  Would be even better if I'd put some home-made compost on it too - but I was too lazy.  Anyways, as I'm now 23wks pregnant and my belly is not staying hidden under my clothes anymore, I figured I'd best stick to low maintenance veggies in the beds.  They are raised but only about 6 inches so you still have to kneel to attend to them.  They are 1m wide so stretching forward to reach the other side is a necessity also.  I can imagine this being a problem in the coming months as my melon sized bump grows bigger!

So, what did I plant?  I don't often stick to rigid spacing of veggies - I thought the idea of raised bed is cramming veggies in small spaces?  I have planted 40onion sets (Stuttgarter) in veg bed 2 and with the remaining 1/2m x1m space I also popped in 4 courgette seeds.  Yes, early I know, but hey ho, if they germinate then YAY!  If not, well, I'll stick some other squash/courgette in later.

Veg bed 1 is another low maintenance plan with sweetcorn and sugar snap peas.  I think I ended up putting 18 sweetcorn seeds in and finished the packet (Lark F1 - very nice they were too last year!) and in the other half of the bed I put in 60 sugar snap peas in.  I usually germinate these indoors under damp kitchen paper but I am being lazy again!  I have some spring onions that live permanently in a corner of this bed but the chickens have been pecking and trampling on it.  I have pea/bean netting thrown over each bed to keep the pesky digging chickens out.  There are netted side panels that hubbs built a few years back.  They were intended to keep the local cats using the beg beds as giant litter trays and it's great for keeping chickens out too - as long as you cover the top as the chickens will hop/fly on to the side panels and jump in if they had half the chance!

I have also a pot/tub garden by the side of the house.  This came about as the chickens would eat the pepper plants in previous years that were grown on the patio.  They are partial to their leaves and also anything red such as ripe tomatoes!  We have a tub of asparagus and this year is year three so it's the long awaited sampling time!  2 pots of strawberries, 2 troughs of goji berry shrubs (got 'em for mum but she said I could grow 'em in my garden - why did I bother?!?!).  I have also planted up a potato bag with 5 rooster potatoes and two small bags with Charlotte potatoes.  I like grow your own spuds.  So easy and I love the delight of finding 'gold' under the dark soil - well, finding potatoes actually!  I now have a tub of 18 baby sweetcorn (maybe too many here - but hey ho!); a pot of kale (nero di toscana - praying that don't become slug food yet again!); pak choi and 2 pots of choy sum - different varieties.  I still have plenty of seeds to sow but they'll have to wait til I'm back from hols.

All in all a busy afternoon's work and my back aches!  Wish someone would cook me my roast leg of pork for dinner but that's only going to be done by me!
Posted by PlumLeaf 李葉 at 7:28 pm No comments:

I made a carrot cake again recently.  The occasion this time was because a work colleague was moving to another branch. 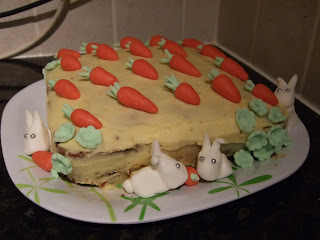 I made marzipan carrots to decorate it with and had left over carrots.  I thought a few cheeky rabbits feasting on the carrots would be fun!
I also had some green icing left and so turned these into green flowers to add onto the cake.
The cake was beautifully moist, full of succulent raisins and full of orange and warm spice flavour!  It certainly is my favourite carrot cake recipe and has always been popular when I've made it for friends and work colleagues.
I may try the same mix but in small cake cases so it makes small carrot cakes.  That way no fighting for the biggest slice!
The recipe is from a great cake baker in my opinion, Delia Smith, but I sometimes make a few tweaks.


Then sift together the flour, bicarbonate of soda and the mixed spice into the bowl, tipping in all the bits of bran that are left in the sieve.


Now stir all this together, then fold in the orange zest, carrots and sultanas. After that pour the mixture into the prepared tin and bake on the centre shelf of the oven for 35-40 minutes, until it is well risen and feels firm and springy to the touch when lightly pressed in the centre.


While the cake is cooking, make the lemon butter icing by mixing all the icing sugar into the soft butter.  Add the lemon juice to your taste then colour with yellow colouring if liked. Now you need to make the syrup glaze, and to do this whisk together the fruit juices and sugar in a bowl.


Then, when the cake comes out of the oven, stab it all over with a skewer and quickly spoon the syrup over as evenly as possible. Now leave the cake on one side to cool in the tin, during which time the syrup will be absorbed.


Then, when the cake is completely cold, remove it from the tin, spread the topping over, cut it into 12 squares.  You can make rabbits from fondant icing (I used silver balls for eyes) and colour marzipan with colouring to make carrots. 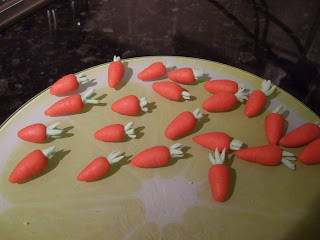 The marzipan carrots were quite easy to make - attaching the 'greens' was fiddly business though!  I even marked 'lines' on the carrots to make them look realistic. 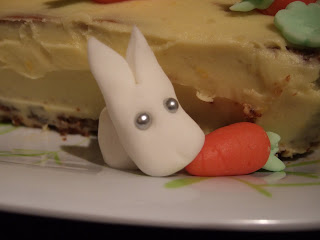 Quick!  Someone stop that Cheeky Carrot Chomper!
The rabbits were fun to make and were just formed from fondant icing.  Sweet in both senses of the word!
My work colleague did enjoy the cake and I even made sure he had some to take home to his missus.  Apparently, she ate first and then asked questions later!
Posted by PlumLeaf 李葉 at 7:22 pm No comments: