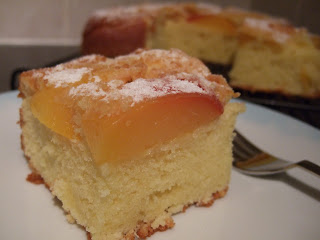 Thought I'd try post while the is cake still warm!  Makes a change - usually the post is well after the event and you'd be lucky if there is any cake left!!!

This is very similar to the ubiquitous Fruit Pastry Cake which I have made several times.  I love adding a mix of fresh fruit like raspberries, peaches and kiwi.  Blueberries are really good too!  I find it's great for sharing at work as you can make it in a large tin and cut it into squares - enough to go round!  If you google Fruit Pastry Cake you will find enough recipes floating around.


The original recipe calls for peaches and I had nectarines at home - to me they are the same except they are fuzz-free.  I tweaked the recipe a little as this is my second time baking it and although the original is good, I didn't see the point of baking this with brown sugar as it made the cake look a murky brown colour and not very appetising.  Also it calls for 250g sour cream.  This I found was far too much and it made the cake heavy and dense - hubbs (Mr Leaf) still liked it as it was moist.

Score the nectarine into quarters and twist the fruit to open.  Remove the stone and arrange the quartered fruit on the bottom of the prepared cake tin and set to one side.

Put the butter and sugar in a large bowl and beat until the mixture is light and fluffy.  Add the egg yolks 1 at a time, beating well after each addition.  Fold the flour and yoghurt in 2 batches.

In a separate grease-free bowl, whisk the egg whites until they are foamy.  Add the cream of tartar and continue to whisk until they form stiff peaks.  Using a large metal spoon, fold the egg whites into the cake mixture in 2 batches.  Spoon the mixture over the fruits and bake in the preheated oven for 40-50 minutes, until the top is golden and the centre springs back when gently pressed.

Leave to cool in tin for 10 minutes, then carefully turn out and peel off paper.  Dust with icing sugar. 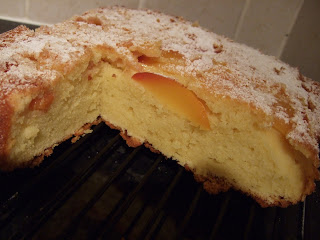 Don't forget to line the base of your tin with paper!  I omitted this step and found parts of the cake stuck to the tin!  Being non-stick, I did manage get them out and lay them back on the cake where they came from - a liberal shaking of icing sugar and if you won't tell, no-one will know!!!

Wonderful served warm from oven with vanilla ice-cream or a dollop of softly whipped cream!

Found some photos from when I first made this in October 2010 (I did mean to blog it!). 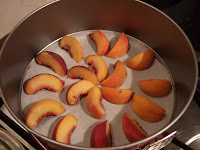 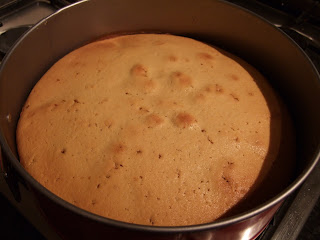 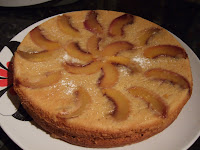 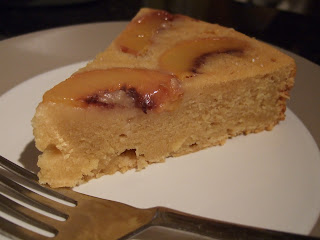 See, the cake is quite dense and not a very attractive shade of butterscotch.  I think it would look more appealing if it was a golden yellow cake.  I was disappointed with the outcome as I felt it too heavy.  When I follow a recipe book I expect the results to be good.  I decided that if I were to make it again I would make it like Fruit Pastry Cake which always turns out well. 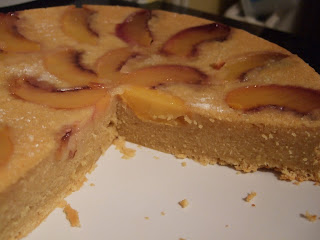 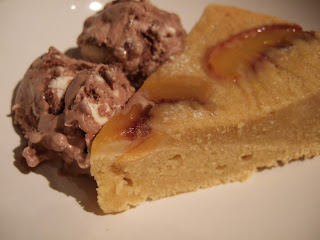 Ice cream goes down well with most cake - think I was out of vanilla here and had Ben & Jerry's!
Posted by PlumLeaf 李葉 at 10:48 pm 6 comments:

Each week there is a coffee meet with mum's and babies that I go to when I can.  It started with three of us who met at Aqua-Natal.  After I gave birth to Minh, we arranged to meet for coffee and it stemmed from there.  Slowly the group has grown from adding a few more aqua girls, then people adding friends with new babies too.  Although this is nice, it does mean that it can be difficult to catch up with those you really want to.  Have you considered how much room us mums and babies take up?  Some of the mum's walk to the coffee meets so there are always lots of baby buggies!

Well, four of us aqua girls decided to have a mini-gathering earlier this week and one of us offered their home as a venue.  She said she would make us soup for lunch so I said I'd bring cake.  I don't need much persuasion to get into the kitchen to bake really!  I had intended to bake the night before the gathering but had spent longer at the airport seeing Mr Plum off (returning to Hong Kong).  Dad's flight was cancelled and he was transferred to the next flight which was 3 hours later.  Mum & me (oh and Minh) kept Dad company to while away the time.  It was late when I got home and Mr Leaf was in bed asleep (oops! we didn't have much of a Valentine's Day together!!!) so it meant no baking until the morning.

The host I learnt, is wheat-intolerant.  A bit of a bother when it comes to cakes but there are a few recipes that are flourless.  Over Christmas I treated myself to a cookbook, The Great British Book of Baking.  I remembered admiring a cake in the book thinking how delicious it looked and vaguely recollecting it was flourless.

It was surprisingly easy to make, light and delicious!  Very melt-in-the-mouth! 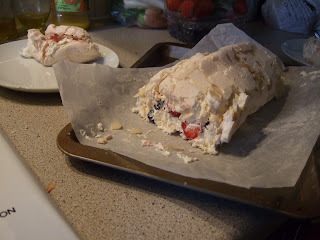 I made a few tweaks here and there but essentially, it's from the book.  The photo isn't great as we were so looking forward to enjoying the cake I almost forgot to take a picture!

Heat oven to 150 C / 300 F / gas 2.  Put egg whites and lemon juice into a spotlessly clean and grease-free bowl and whisk with an electric whick, a large mixer or rotary whisk until they form stiff peaks when the whisk is lifted from the bowl.  (I put the whites into the bowl of my stand mixer and whisked until large bubbles formed - like washing-up bubbles.  I then added the 1/4 tsp of cream of tartar and continued to beat until the stiff peak stage.)  Mix the sugar with the cornflour and whisk into the egg whites a tablespoon at a time, to make a stiff and glossy meringue.  (The addition of cornflour helps get that chewy toffee texture in the meringue.)

Transfer the mixture to the prepared tin and spread evenly.  Scatter the flaked almonds over the top of the meringue (I miss-read the recipe and sprinkled flaked almonds on the base before adding meringue.  I guess the almods would become nice and toasty if I put them on top as directed!) and bake in the heated oven for 45 minutes, until risen, golden brown and firm to the touch - the centre will still be slightly soft.  Turn the meringue out on to a sheet of non-stick baking paper and lift off the tin.  (Using the paper, I lifted the meringue out of tin, carefully laid it face-down and peeled off paper, then laid it back on the paper to cool completely.  Didn't want to waste paper.) Leave to cool for 10 minutes, then gently peel off the lining paper.  Leave until completely cold before filling.

When ready to finish, whip the chilled cream until very thick. almost to stiff peak stage - if the cream is too firm, though, it will be difficult to spread.  Spread the cream evenly over the meringue (remember you want to spread the side with no almonds as that will be presentation side, my presentation side was the bottom as I put almonds on wrong side!) and top with the raspberries.  Roll up the roulade from one long side, using one hand to guide the meringue into shape and the other to use the paper to support the meringue and pull it into shape as it rolls up.  Once the meringue has become a roulade, use the paper around the roulade to hold it in shape by wrapping it firmly.  Chill for an hour before serving.  A good accompaniment is some fresh or frozen berries whizzed up with lemon juice and icing sugar to make a thick sauce or puree.  The roulade can be made several hours in advance, but is best eaten the same day.  To serve, cut the roulade into thick slices and spoon over a little of the raspberry sauce.

Us girlies didn't chill the roulade as we didn't have time.  After baking the meringue, I cooled it for an hour by an open window then transported it in its tin to my friend's house.  Once there, I whipped up the cream until fairly stiff but softer than you would use if you were piping it.  Slathered the meringue with the cream and topped with blueberries and chopped strawberries.  Rolled the meringue so the long sides met one another then we sliced straight away.  It was heavenly!  Not overly sweet but was so light and melt-in-mouth!  Really beautiful!  Looks impressive but easy to prepare!
Posted by PlumLeaf 李葉 at 12:55 am 6 comments:

Email ThisBlogThis!Share to TwitterShare to FacebookShare to Pinterest
Labels: Baking

Both my parents are Hakka descendants and when we were little wewere taught to speak our parents' mother tongue, Hakka.  As we grew older, English quickly became our preferred language as we were surrounded in English language through school, television and our friends.  We still had to speak Chinese at home to our parents though and we even went to Chinese School to learn how to read and write in Cantonese.  Nowadays, we mainly speak Cantonese at home. 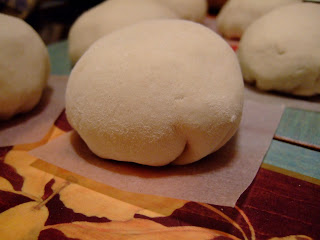 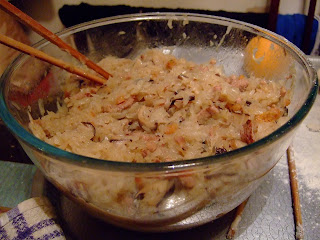 It has a soft dough that almost sticks to your teeth without being tough and chewy and is filled with shredded radish which is seasoned with lots of white pepper, sweetened with dried shrimps with ground pork and Chinese mushrooms for added flavour.

She made these back in November (I've been meaning to blog about so many things!  I have a backlog building up!) and although I wanted to help her - the technique she used to roll the dough skin seemed tricky.  She was precise with the dough skin, it had to be a certain thickness and if it wasn't right she would scrunch the dough up and start again. 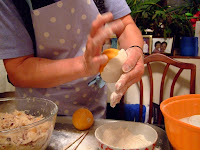 Here you can see her rolling the dough around an orange.  This is so it will have the 'cupped' shape which is then generously filled. 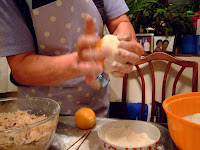 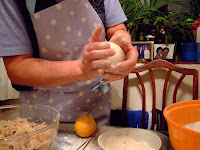 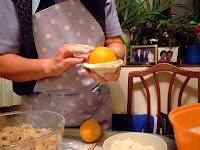 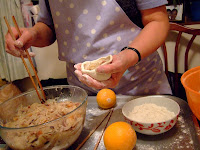 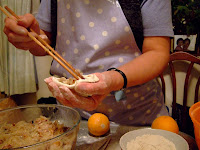 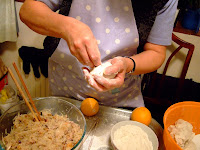 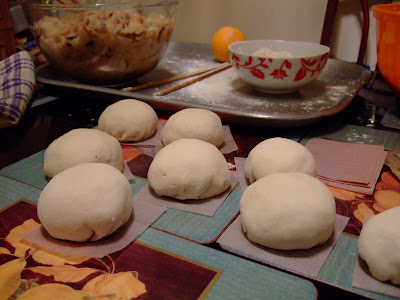 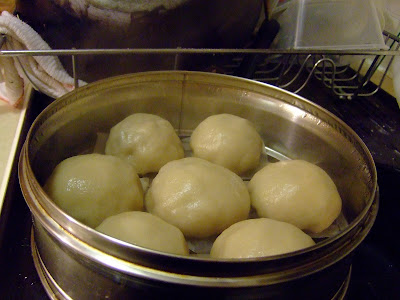 Stuffed and steamed ready for sampling! Mmm!  Reminds me of my childhood days!
Posted by PlumLeaf 李葉 at 10:26 pm 12 comments:

Not very good with posts this year.  Being up to lots of kitchen hi-jinks recently and finding the time to blog them is hard.  (Maybe spending my baby free-time on facebook is not constructive!)

Anyway....last week I was busy making a special birthday cake for my friend's daughter.  It was her 1st birthday on Saturday 12th February.  I was honoured that my friend had asked to make the cake and I was lucky enough that my friend had no specific requests for the cake.  It had to feed 20 people and it was to be a vanilla flavoured cake with fondant icing on it. 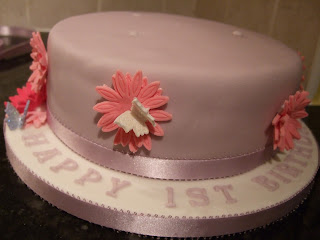 I decided that I would make a stacked cake so there would be more than enough cake to go round.  I made a 6" chocolate cake sat atop an 8". 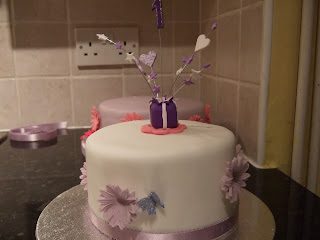 All in all, I was pleased with the outcome.  I had some hiccups towards the end and learnt some valuable mistakes.  Most of all, my friend was overwhelmed with the cake and her friends and family all ooh-ed and ahh-ed.  Even the waiting staff at the restaurant admired the cake! 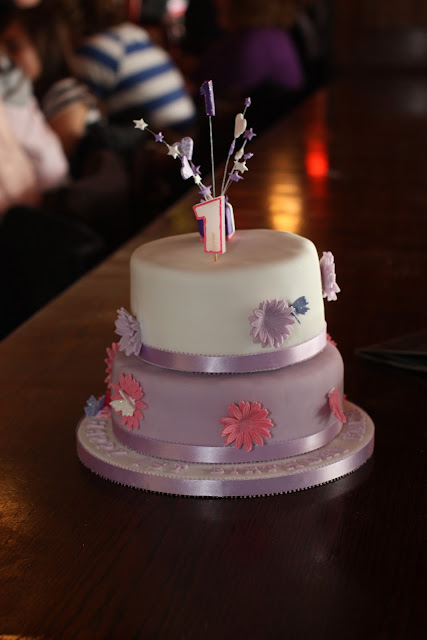 
Welcome in the Year of the Rabbit! 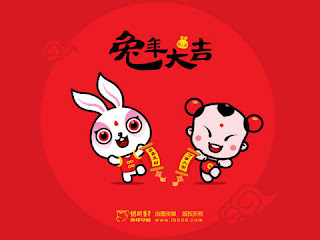 I wish you all a Happy Chinese New Year!!! 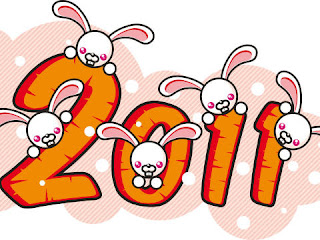