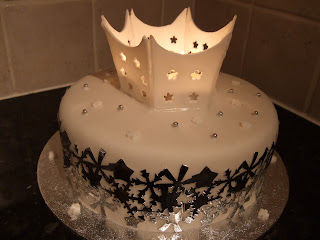 I haven't made Christmas cakes for a few years.  My family find them too rich, dense and sweet.  When I enquired whether Mr Leaf liked them he told me they were "too fruity".

I've been baking more this year and as a result of having this blog, taking pictures of my makes and bakes and sharing them (if not here, facebook).  I sometimes bake cakes and take them into work.  I like to try new recipes occasionally and when there's only me and Mr Leaf there's only so much cake two can eat.  We now have a Baby Leaf but there's no chance of him sampling cake for a while.

One of my work colleagues asked if I made Christmas Cakes and if so, would I make one for her.  (She insisted she pay so I wasn't to argue.)  I agreed and the above photo shows her finished cake. 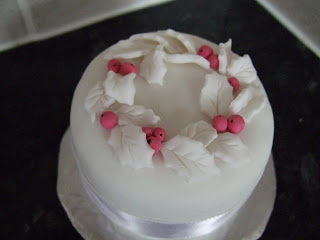 I enjoyed baking the cake, simmering the fruit in orange juice and brandy - it smelt sooo good!  I whipped up another batch (different recipe this time) and made one square cake and two smaller round cakes.  The square was halved to make two bar cakes.  The Frosted Holly Cake above is for one of our neighbours. 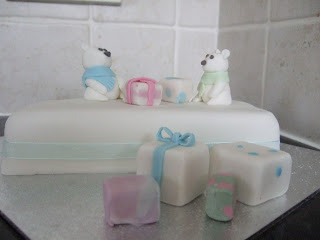 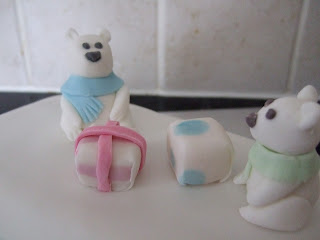 These two Polar Bears and Presents are for our neighbour on the other side of us.  They have two young children so I thought they'd like all the presents! 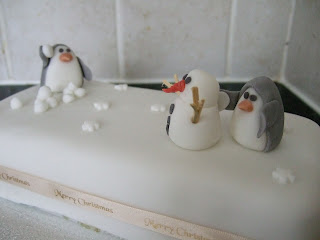 This cute scene, Snowball Fight with penguins and snowman was really fun to make!  I like the innocent penguin building his snowman unaware that his 'friend' is about to attack him with snowballs!  He eveb has a little supply of balled up snow ready as ammunition! 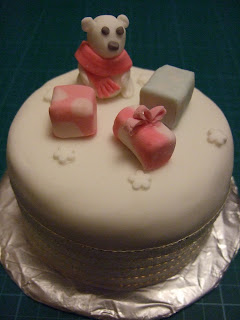 This little cake is for my friend who will be celebrating their first Christmas with their daughter who will be 10 months old.
Posted by PlumLeaf 李葉 at 3:42 pm 9 comments: 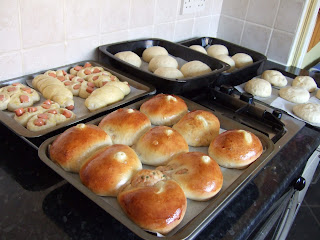 Was woken early by the "Boss" (also known as Baby Minh) so I thought I'd might as well get on with baking the buns I'd prepared the night before. 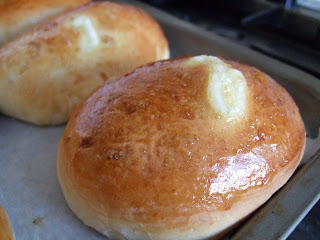 Tuna mayo buns are a favourite of mine from hols to Hong Kong so I recreated them at home. 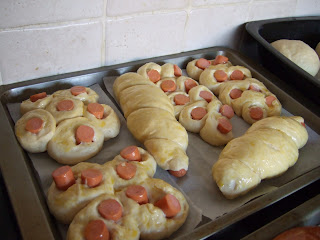 Sausage buns were a childhood favourite so I'm reliving some memories.  Although they were mainly just rolled around the sausage - a bit like a mummified sausage. 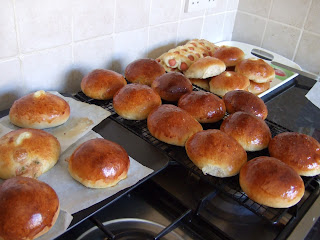 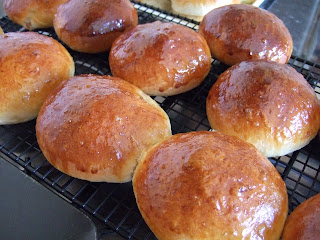 Had to make some Char Siu Chan Buns too! 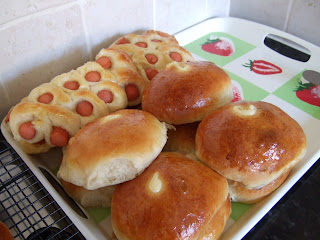 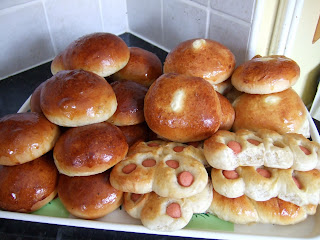 Tray of buns ready to take to my parents house later.


** I did this post in a hurry & have now included links to the recipes where available.
Posted by PlumLeaf 李葉 at 1:58 pm 6 comments:

Wishing all you lovely people a very happy Christmas however you choose to celebrate it!  Christmas doesn't have to mean turkey and the trimmings, exchanging gifts.  Celebrate how you choose to.  Eat great food, share laughter with family and friends and create happy memories to look back on.

Best wishes to you all and may the new year bring with it much happiness, peace and love to you all!
Posted by PlumLeaf 李葉 at 2:11 am No comments:

Email ThisBlogThis!Share to TwitterShare to FacebookShare to Pinterest
Labels: Christmas

Snow, Snow Go Away, Come Back Another Day

Britain is covered under a blanket of snow.  It is causing havoc with transport in the country as airports are closed.  No flights landing and minimal flights leaving.  We don't cope very well with snow in this country and only a thin sprinkling of snow is enough to cause disruption to transport links.

I usually spend Monday's at my parent's home and we had planned to go to a Chinese Supermarket to stock up on goodies for Christmas.  Mum makes Chinese soup every week and at Christmas time she makes one with exotic roots and tubers.  Well, exotic to the natives here but I've grown up seeing them so not weird and wonderful to my eye!  This soup would have the following: 粉葛  Arrowroot or Kudzu (I would pronounce this 'fun goht' in Cantonese, I believe it may be known as 'fen ge' or 'ge gen' 葛根 in mandarin); 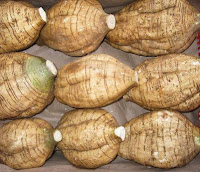 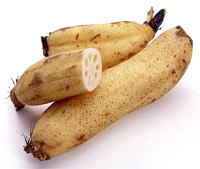 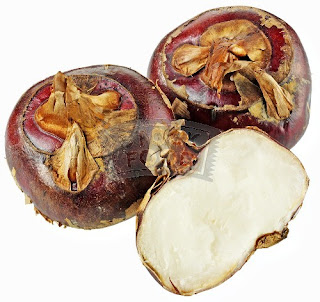 It would also have things like pork bones, carrots other goodies to make it flavoursome and sweet.  I had suggested we go buy these last week but noooooo parents wanted to leave it to the week before Christmas.  Personally, I though getting it two weeks before the event will hopefully mean less crowds.  Parents obviously wanted it last minute as possible so it would be fresher.  Well.  With the snow that we had and the chance of more in the afternoon it totally scuppered the idea of me leaving my house to get to them (they only live 25 miles away 35-45 minute drive normally).  So, Chinese supermarket trip has not been made and the likelihood of having this yummy soup is slim.

I am hoping that the weather doesn't worsen as we always spend Christmas with my family.  My older brother brings his family over and stays at my parent's house and the house is a hive of fun as me and my younger brother play and entertain my niece (she will be five soon!).  Was having depressing thoughts of being snowed in at home and spending a quiet time just me, Mr Leaf and the baby.

Although I have some more material to blog and pics to show you (foodie ones too!), I'm going to take this opportunity to wish you all a very Festive Christmas - may it be merry and bright!  Best wishes for 2011!!! 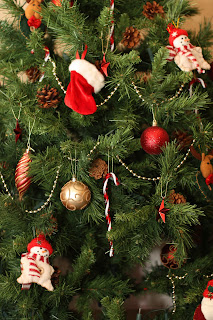 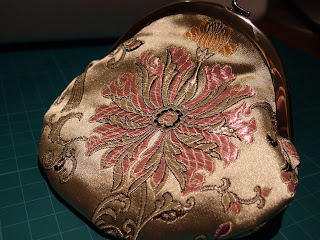 Hi, well I remembered to use my newly made bag to my work's Christmas Karaoke and even made a matching coin purse.  We went to a Chinese All-You-Can-Eat Buffet and wore a blue Cheongsam.  My colleagues were too busy admiring the dress to notice my bag!

Ah well......I'm so pleased that they remembered to invite me and we did have a very good time!  I also delivered my first Christmas Cake to a friend as she'd asked me to make one for her - she was pleased!  (I'll show you pics of all my Christmas Cakes later!) 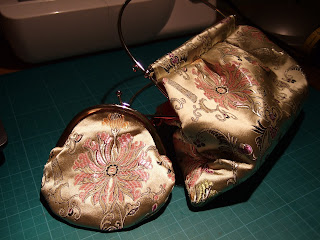 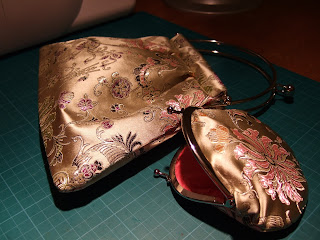 I've bookmarked this purse tutorial for a while now and even bought the hardware for it.  I had an idea of what fabric I wanted to use too but I heard it's tricky to use as the edges are prone to fraying. 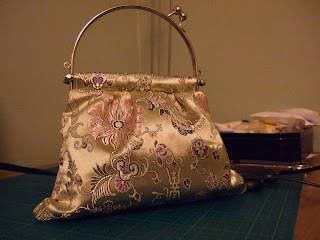 I love Chinese Brocade fabric.  Maybe it's the oriental in me?  I'd like to think it's silk, but I think I just have the polyester type.  As it's so smooth, slinky and shiny, I thought a similar lining fabric would be appropriate.  So I opted for polyester lining material.  Another slippery contender which frays at a mere stroke. 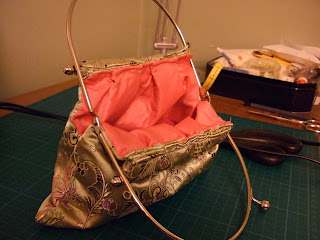 Cutting the material wasn't too difficult as the pieces aren't large.  I took my time as this was going to be a Special Going Out Bag.  :0)  I decided I would try prevent too much fraying by using some fusible interfacing on the wrong side of both the brocade and lining.  Idea being 'cos it's stuck to something the edges won't fray?  Worked on the lining and the brocade still frayed a little - might just be the loose strands though.  The pattern uses heavy sew-in interfacing as well which makes the bag lovely and slightly padded.  It means it can be an absolute @*$% to sew 'cos it gets thick in places!

Still.  It's finished and ready for it's first night out next week.  Am impressed that I'm not working on it minutes before I plan to use it.  I'm rather chuffed with my bag. 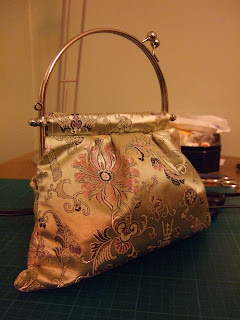