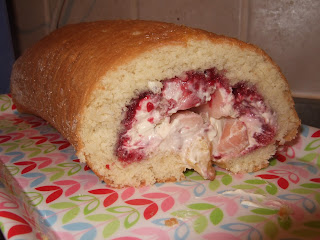 I don't make Swiss Rolls because I am awful at them.  My late Grandfather (mum's side) was a baker and would make Swiss Rolls filled with Buttercream and sell them to the local Chinese Supermarket.  When he came to visit us I would love to watch him whip eggs sugar and flour into fluffy creations.  I did not possess his skills.

Determined not to resort to a shop-bought cake for hubb's (Mr Leaf) birthday, I was trying to come up with a cake that wouldn't be too sweet or too large.  Whilst internet browsing I came across a Raspberry Swiss Roll recipe by one of my favourite chefs James Martin.  I had intended to make this at my mother's yesterday (hubb's actual birthday) but was too busy.  So I set to work in the kitchen today.

I was pleased with the outcome as it did not crack or split on rolling :)  I didn't see bubbles of flour on the base of the swiss roll (as in previous efforts).  I hope my Grandad would be proud of me :)

My mum has raspberry bushes in her garden and they are in season now - I was going to put fresh raspberries in the filling with the cream but seeing as I forgot to pick any to take home I had to rumble in the fridge to see what we had.  This Swiss Roll is filled with Homemade Raspberry Jam, Vanilla Cream, White peach and Mango. 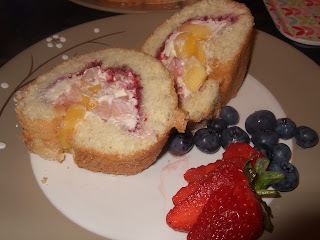 The sponge for the swiss roll is simple, just 3 ingredients; eggs, caster sugar and self-raising flour.  It's very light and spongy but is fat-free so does not keep well.  It is not as moist and pillowy as a chiffon either - makes the addition of cream and fruit seem less guilty! Heh Heh Heh! 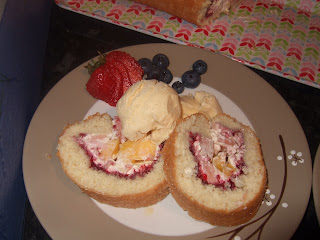 Recipe for the Swiss Roll is here: http://www.bbc.co.uk/food/recipes/raspberry_swiss_roll_08757 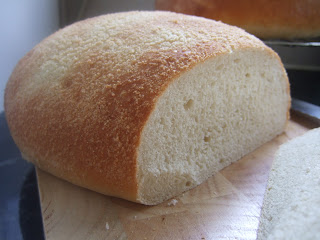 I love Tiger Bread!  It's a loaf with a special coating on which you can get in the fresh bakery section of the major supermarkets here in UK.  A distinctive aroma which reminds me of toasted Marmite which means it's yummy in my opinion!  It has a lovely crackly crust which is usually on bloomer shaped bread.  I've seen a supermarket call its Tiger Rolls, Tiger Paws!  The baguettes are Tiger Tails of course! :D

One supermarket chain changed the name to Giraffe bread after a little girl wrote in saying it resembled giraffe more than tiger.  She's not wrong! 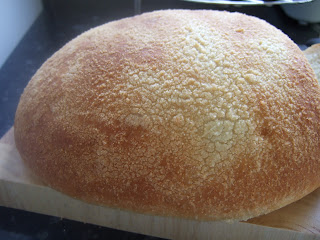 Seeing this recipe posted on Jo's Blue Aga, I had to give it a try.  I follow Jo on her Facebook page too :)  As well as entering her monthly baking competitions! 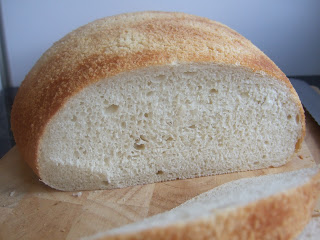 With a cupboard stocked with strong flour (for bread baking) and a fresh packet of dried yeast I thought I was good to go.  I assumed I had rice flour in but my luck was out.  Rice flour is the magic topping ingredient here too!  I had everything but that!  Plain flour; self-raising; gluten-free flour; tapioca flour; potato starch, glutinous rice flour and cornflour!  None of which I have seen suggested on the internet as a substitute for rice flour!

Determined to try Tiger Bread, I thought I'd grind my own.  First I used the food processor attachment on my electric hand blender.  Next, good ol' mortar and pestle.  Finally, the coffee grinder which has never ground a single coffee bean in it's life of sitting on the kitchen shelf looking pretty!  After sieving the flour through it resembled semolina you roll pizza dough out with.  I still gave it a try but only made a quarter of the  topping.  I used this to spread on one of my loaves which was proving nicely after my battle trying grind rice grains!  The other loaf I left plain in case the home-ground rice flour topping was a complete disaster! 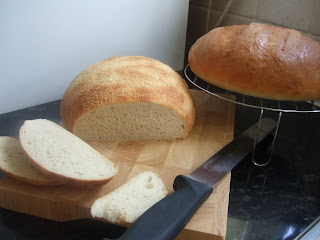 The resulting bread was definitely not like the Tiger Bread you buy in shops.  It lacked the toasty aroma and I struggle to get the nice crunchy crust on my home baked loaves.  It also didn't crackle very much.  Despite all that, it was a very nice tasting loaf, soft and springy.  It's amazing what 'still within date' dried yeast can do compared with 'hiding in the cupboard too long' yeast can do!


Competition Number 3 by Jo Wheatley of Jo's Blue Aga - and it's the Basic White Loaf, again from her book, A Passion for Baking.

This came in great timing as I fancied making bread and had just stocked up on strong bread flour (it has higher protein content which helps the structure of the loaf), shame I didn't have sense to buy some instant yeast as what I had in the cupboard had been knocking around for a bit :p  They say it deteriorates quickly and loses its ability to rise well.  *Shrugs*  Ah well :p

It was a simple recipe to follow and we had option of using stand-mixer or by hand.  Well, I pulled out my trusty Kenwood and made it work :p  I do have an almost 2 year old to entertain too you know! ;)


Maybe my shaping of the loaf before it goes in the tin needs perfecting as the bread rose unevenly during baking and resembled an odd shaped mushroom :p  I had forgotten how delicious the aroma of bread baking in the oven was :D  It was hard resisting temptation to slice into the loaf whilst warm - but I think that just tears the bread.

Oh, I can't cut fresh bread - I always managed to get wonky slices that resemble door wedges! :p  There is an upside to that that though, my correcting slice was too thin to be a regular slice of bread and so I sampled that with some butter and some home-made raspberry jam!  Ahem!  I mean I had to have a slice with butter and jam for the photo shoot of course!  *Wink Wink!*

* * *
I baked the loaf last Thursday but to spare you the suspense of waiting to find out who won, I have waited until today (Tuesday) to publish this post.  Winner was announced this morning - not my entry but I enjoyed taking part and seeing other people's entries :) 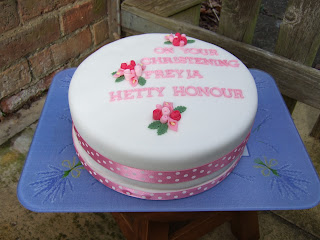 Sometimes I get asked to make a celebration cake for a special occasion.  It's not very often and it's usually from someone I know.  I rarely decline the request as I feel it's good practise for me :)

I was lucky enough to make some really great friends when pregnant with my son and although we've only known one another for two years, we do not fail to meet up regularly.  I truly feel that we will stay life-long friends too!  I call these special girls my Mumma Friends.

Given the opportunity to make a cake for one of them gives me great pleasure and I was honoured to be the baker for the Christening Cake pictured above.  This Mumma Friend always gives me creative reign only specifying colour or a general idea.  Oh, and of course, choosing what type of sponge the cake is to be :)

This cake was made back in March and I'm struggling to remember what I'd filled it with!  If I recall correctly, it was a 10" round Vanilla Sponge, sandwiched with Vanilla Butter-cream (Swiss-Meringue) and quite possibly, home-made raspberry jam.  Covered in white fondant and decorated with fondant mini-roses and calla lilies.

Cake was a bit of a whopper in the end and really should have sat on a slightly bigger cake board - but then again, it wouldn't have fit in the box!  Technical details aside, friend loved it and that's what matters! 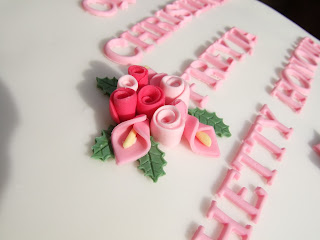 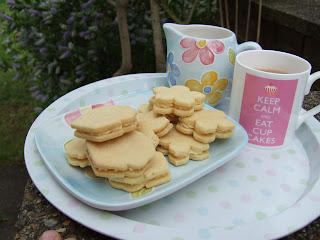 Following Jo Wheatley's popular competition, she decided to host another!  This time Custard Creams (a biscuit sandwiched with vanilla custard) sweet but an old British classic :)   Again, the recipe is taken from her book, A Passion for Baking.

This was a fun recipe to do but I did find the biscuit dough tricky to handle.  My tip is to keep it between sheets of cling film to roll out. :) 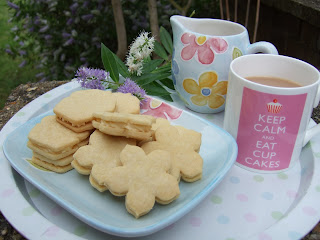 These biscuits were a hit with my son (he's only an almost 2 year-old toddler and; quite the biscuit connoisseur!) and my mummy friends. :) 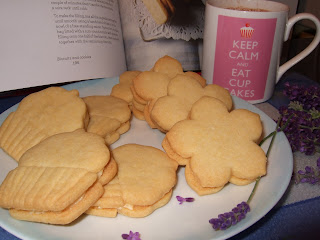 As you can see from the first two photos, they were taken outdoors.  I had forgotten part of the competition rules which stipulate the book must be present in the photo.  Hence, I had to do a second bake as it was only when I was about to upload my photo for the competition, that I discovered my error.  As luck would have it, the 'nice-looking' biscuits were eaten :p

The last photo is an indoor shot and I only just managed to get baked, biscuits arranged and uploaded before time ran out! :p  Even had me nipping out in darkness to snip a few lavender stems to prettify the photo!

A Passion For Baking - Cake Competition


Jo Wheatley is the winner of Great British Bake Off Series II (2011).
The show takes non-professional bakers and puts them through a series of challenges and each week a contestant is eliminated.  The next series is due to be aired in a few weeks time and I am looking forward to watching it!

Jo has recently published her book, A Passion for Baking and it's a well written book.  No long and fancy ingredient lists and most of all, I love it when the author adds a note about the recipe, whether it's one of a family member's favourite or a creation for a get-together with friends.  It is like the author is sharing a bit about their life and I like that friendly touch. :)

So, to celebrate her book launch, Jo hosted a competition ~ the prize was to win a day on one of her Masterclasses that she runs from her home.  We were to bake the Chocolate Birthday Cake from her book and include the book in the photo to show that we had followed her recipe.

Here was my take on it: 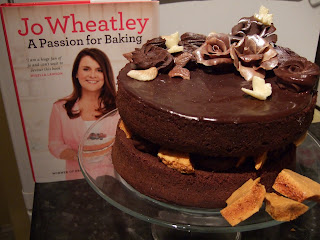 I made modelling chocolate with dark and then white chocolate which I used to hand make some roses, leaves and butterflies.  Modelling chocolate I've said somewhere else before is really odd stuff.  Its stiff and hard yet gets greasy when warm.  Not fun at all.
The cake was filled with chocolate ganache which piped in rosettes and attempted piped roses (like they do on cupcakes with butter-cream) I don't think my nozzle is quite the right shape :p  I decided last minute to make some  honeycomb (also known as cinder toffee, hokey-pokey).  This was fine except that overnight in a cake it kind of melts and ends up being like chewy toffee.

It was a great recipe but I think my execution was wrong.  I don't think my oven works that well and when I checked the cake after its allocated baking time it was definitely not ready.  I ended up over-baking it :(
Piped chocolate ganache swirls was a bad idea too as its pretty firm on cooling and it meant the cake was hard to slice.  The knife couldn't cut through the ganache and so would drag it down squashing the cake.  Perhaps I should have used a hot knife?

Nevertheless, I entered the competition.  I didn't win or get chosen as one of the six finalists.  The cake looked pretty though :p  Oh, I think it coincided with Father's Day as well as my neighbour's birthday so we shared some cake with our neighbour too :) 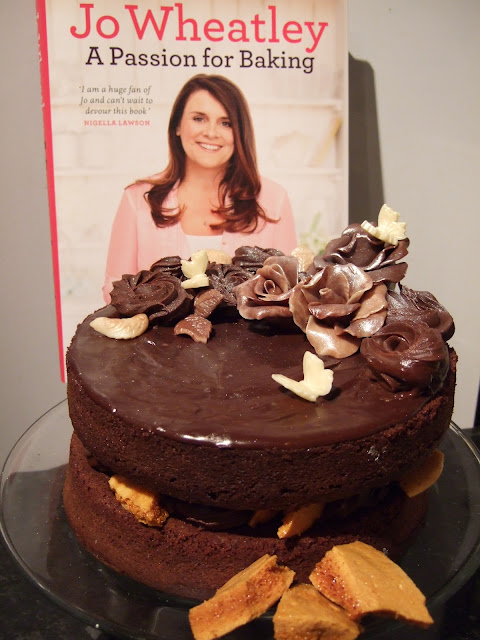