It's All Greek to me!

W-e-l-l...have lapsed a little on the blogging and posting....have been cooking and creating in the kitchen - have taken some pics but not been blogging - I blame it on spending too much time on facebook! :0p
OK, I don't usual post and blog dinner creations as it's a case of, "Dinner's Ready!" and then it's "Chomp, chomp. CHOMP!" in front of the TV!
Today is an exception....I thought I'd make stuffed peppers for dinner - Greek style served with Greek salad.  Never made this before so I read a few recipes online to get the general idea before coming up with the final creation. 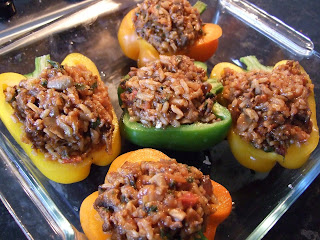 I made the filling first: it's made from beef mince, red onion, mushroom, tomato, herbs and some cooked rice. 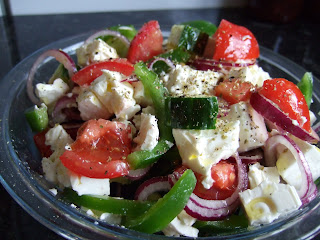 I let it cool slightly whilst I made the Greek salad.  The filling was then piled into the halved pepper shells before baking in a hot oven for about 30-40minutes.  I think it would've been nicer served with a tomato sauce as it needed a little something to add moisture to it.

The Greek salad I made has cucumber; green pepper; tomato; red onion and feta cheese.  We first had this 5 years ago when on honeymoon in sunny Santorini, Greece.  It really brings back sunny memories of the deep blue sea of the Mediterranean and cloudless blue skies. 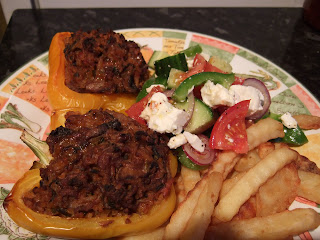 We ate this with some oven chips although with salad it would make a substantial and healthy meal.  I made too much pepper filling so I may use it up to make a moussaka - another Greek dish.
Posted by PlumLeaf 李葉 at 11:23 pm