Have been meaning to make jam for a week now....
I  bought a mango a week or so ago and it was a bit firm although the sticker said 'Ripe and Ready', I asked hubbs whether I should cut it up for our fresh fruit dessert.  I did.  It was hard.  Tasted sour.  Not ripe.  Knew I should've trusted my nose and instincts.  Usually I would give the fruit a gentle squeeze in my palm and it should yield a little.  Next a sniff test.  Does it smell aromatic?  Yes?  Well it's ready!
Well, what was I going to do now with an unripe mango?
"Stir-fry it." Hubbs says.
"Yuk!"  I say.  "I'm not into having fruits cooked with meat for stir-fry."  I have eaten kiwi with chicken and stir-fry beef with mango and it's not really my cup of tea.  Don't mind pineapple in a good ol' sweet and sour dish though! :0p
"Turn it into jam then."  Hubbs final suggestion.  Sounded good at the time.
So, it took me a week (or two) to finally get round to making the jam.  I saw 2 punnets of apricots on discount at the supermarket and bought those thinking apricot and mango sound divine!  Thought my sad little mango probably wouldn't be enough so  bought a cheap small one to join it.

When it came to making the jam yesterday, my unripe mango (sitting sadly naked in the fridge - well, it was peeled and had nothing but clear cling film to shield it's modesty!) was beginning to look a little brown and squishy in places.  I cut the unsightly portions off and proceeded to sample the fruit.  Still did not taste good.  Still sour and now a nasty aftertaste (mango prob past its best).  OK, bin time for the poor mango!

Despite that, I prepared the apricots and the cheap mango.  Oh, note to self, cheap mango means it's the fibrous kind.  The one with more fibres round the central stone than flesh!  (Smells good though!)  Hmm...could do with more fruit?  I raided the fridge to see what else I could find.  I found a ripe peach and a few cherries.  What do I call the jam now?  Will think on this one. 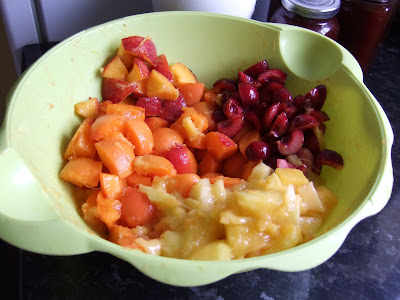 The jam smelt so delicious when it was being made!  Such a rich, intoxicating aroma!  That is the best bit about jam making!  The taste?  It gave my tongue a punch full of fruit flavour!  Other jam successes have been raspberry jam made from raspberries picked from my mum's garden.  Once you've tasted home-made raspberry jam you'll be sorely disappointed in the supermarket offerings!  Blackberry is not such a hit (picked from local hedgerows so free food! Yay!), lacks the full fruity flavour - just offers a sweetness about it and more seeds than raspberries.  I made plum jam too earlier this year from cheap plums from Aldi.  Again, the fruit is sweet but lacks a depth of flavour.  I guess the secret might lie in using fruit which is rich and aromatic in flavour.  Saw some British Strawberries in Asda's yesterday.  They smell and taste delicious.  Would be tempted to jam these too if I hadn't used up my empty jam-jar collection! 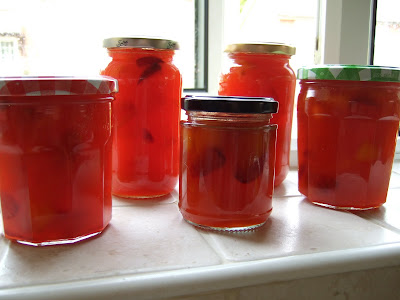 Love the fabulous colour from my "Summer Fruit Jam" - Apricot with Mango, Peach and Cherry.  Sounds like a fairly accurate description?
This batch of jam was largely made with little measuring.  My rule is usually 500g fruit plus 500g sugar equals jam - I got this from reading somewhere on the internet and followed this basis for raspberry jam I used granulated sugar so had to add 2 teaspoons of powdered pectin (helps the jam to set.).
Recipe
1085g prepared fruit (I used apricots - 14, cut into 1/8, stone removed; 1 peach, cut into 1/16, stone removed; 1 mango, flesh chopped, stone discarded; around 20 cherries, quartered and pitted)
1000g of jam sugar (has added pectin and is suitable for soft fruits such as strawberries, peaches...)
Juice of half a lemon
knob of butter
Method
I placed the chopped fruit and sugar in a large saucepan and added half a cup of water (maybe I shouldn't have added this?) to help the sugar dissolve.  I warmed the mixture gently over a low flame stirring to get the sugar to fully dissolve.  I also added the juice of half a lemon to improve the flavour.  I've found when doing this when making raspberry jam it prevents it from just being sweet, but have a very slight sharpness to it which makes it moreish. 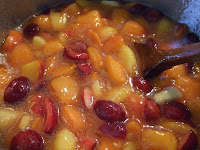 When I was sure the sugar was dissolved (this is very important because if there are undissolved sugar crystals, they will stick and burn on the bottom of the pan when you do the next stage - boiling), I turned up the flame and let the mixture come to a rolling boil (that won't go down when stirred).  Careful!  Use a large pan to make the jam as boiling hot sugar is very hot and can scald!  Boiling jam does spit too! 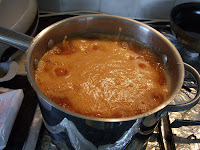 Boil for 4-5 minutes.  Take pan off heat and put a teaspoon of jam onto a cold saucer (I put a saucer in the freezer when I start jam-making.)  Leave for a minute then push the cooled jam with your finger.  If the jam wrinkles, the jam is ready.  Add a small knob of butter to the jam and stir in.  It helps get rid of the bubbles in the jam so you get a clearer jam in the jar.  Leave the jam to cool slightly (5-10 minutes) before filling the jars - you don't want the glass to shatter!  Pour the jam into warmed sterilised jars.  To sterilise jars, wash in hot soapy water and rinse.  Place upside down in a low oven to dry.  Careful when handling as the jars will be hot out of the oven and also after being filled with hot jam. 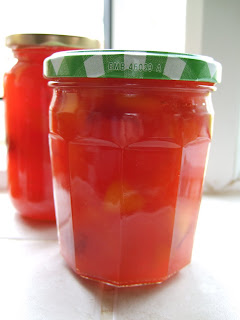 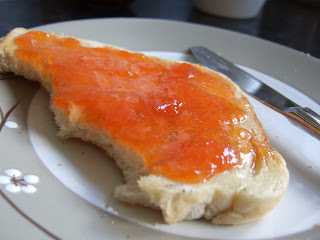 I've given a jar to my mum as there's only so much jam 2 people can eat!  Only thing is, this morning, I've discovered the jam is rather soft-set and looking a bit runny in the jars.  Maybe as a result of adding water to the fruit and sugar mix?  I will have to re-boil the jam for 1-2 minutes and do the saucer test again.  Which is strange as I thought it was fine?  Odd thing is I have a ramekin of jam (all jars were filled) and this seems to have set fine?  I will just have to have some jam and toast and sample it!

Mmmm...!  It's surprisingly good!  An intense fruity hit of apricot and peach which is pleasantly sweet and tangy without the sweet sickliness of store-bought apricot jam.  I think the golden orange hue comes from the cherries I added!  :0)  I think this would delicious on warm buttery scones or even a simple swiss roll.  I'm pleased with this batch of jam!
Posted by PlumLeaf 李葉 at 11:34 am