Inspired by Elin's post on her mushroom dish, I made sure I bought some fresh oyster mushrooms when I paid my weekly visit to my mum.  In my old hometown, there is a ethnic food store that sells oyster mushrooms as well as both green and white pak choi as well as Filipino branded goods and Polish groceries.  I was glad they had the mushrooms in as I was seriously craving a mushroomy dish seeing as its the season for all things 'shroomy right now! 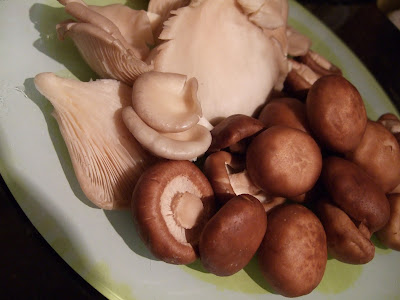 I still had half a box of fresh tofu in water to be used up and I really fancied some mushroom goodness.  I teamed up the fresh oyster mushroom with another exotic mushroom - fresh shiitake!  Fresh shiitake is expensive - 1 box cost me £1.69 and I saw a box of oyster mushroom reduced to £0.89 I was tempted by the discount but I already had those and I really wanted the deep savoury yumminess from shiitake. 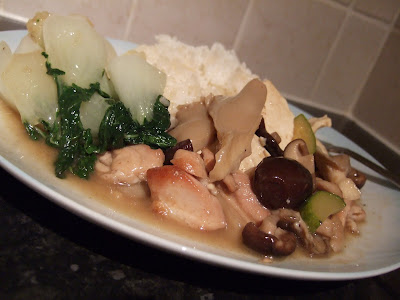 I used chicken thigh for my dish as its a juicier cut than using breast meat but sometimes I opt for the meaty chew of chicken breast in curries.  I sliced the meat and marinated with soy sauce, sesame oil, white pepper and cornflour.  After browning the meat I added the shiitake mushrooms and a splash or two of water to ensure the meat cooked through.  A splash of sherry, shake of fish sauce, drizzle of soy and a blob of oyster sauce were the flavourings for this dish.  I added the tofu slices (no pre-frying this time) to heat up and the oyster mushrooms last minute.  If added too early they overcook and turn to a slimy slippery goo.  I thickened with cornflour paste and this dish was saucier than the previous tofu dish two nights ago.  Nice on a bed of plain rice to soak up the juices.  My fresh mushroom fix satiated!
Posted by PlumLeaf 李葉 at 7:25 pm