In the mornings, the little man wakes at around 08:45 to 09:15 and cries in his cot which conveniently is next to the double bed where I'm sleeping.  I used to think he was hungry and crying for milk.  I would run downstairs to fetch him some milk and make sure it was not too cold.

He would just refuse the bottle, turning his head to dislodge the teat from his mouth or clamping his mouth shut.  Funnily though, he would settle happily in my arms and as I would often still be tired at that time I often snuggled him in he middle of the double bed next to me so we could both get some more shut eye. 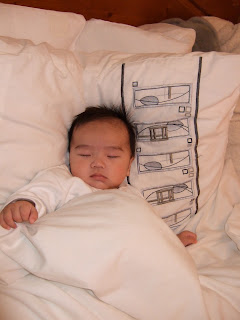 He's settled in the bed now and as I'm up and in blogland, I thought I'd make sure he was okay.  He's tucked up so well and propped up on so many pillows so he doesn't fall down - he looks just like a pampered prince!  Sometimes at silly o'hour in the morning when I'm running upstairs and downstairs for milk as he's crying I feel like that.  Especially when I've fetched the milk and he doesn't want any.  I guess it's nightmares they must have.  I wish I could tell the difference between a night time, "I'm hungry!" cry to a "I'm having a bad dream" cry.  They both sound like something is biting his leg off!

The smallest person in the house surrounded by a pile of pillows to suport him in a double bed all to himself!  Pampered or what?  lol  But you can't help but love him!
Posted by PlumLeaf 李葉 at 1:41 pm

Email ThisBlogThis!Share to TwitterShare to FacebookShare to Pinterest
Labels: Baby