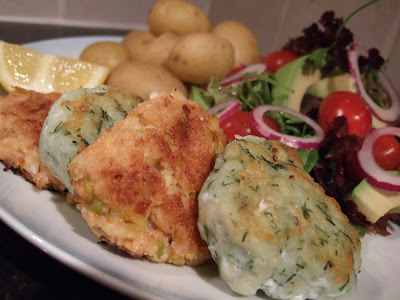 Fish is good for you and we should aim to eat 2-3 portions a week.  That's what is drummed to into us and so I have tried to lead a healthier lifestyle - after all, it means you can treat yourself and be naughty once in a while!  As I see my mum most Mondays, we get our first fish portion then.  Mid-week I need to make sure we have something  seafoody and Friday is another fish-day.  (Tonight hubby will be buying fish and chips on his way home!  Yum!  Yum!)  Wednesday, I attempted to make both crab & fish cakes.

My mother in law was a good cook.  Or so I gather.  I never had the opportunity to meet her as I didn't meet my husband until she had passed away some years previously.  My husband tells me about the things she used to make and cook from scratch, however, when I ask him how it was made he often hasn't any idea.  He was too busy playing to be helping his mum in the kitchen and sadly all her recipes are gone too.
One of the things she would make was cuttlefish cakes - like the ones you eat at dim-sum (we always order those - hubbs favourite).  Hubbs tells me he'll make them for me.  Am still waiting.

Anyway, I had a large fish fillet of cod to use (500 g) and if I still lived at home, I'd make a fish pie.  Hubbs isn't a fan - so scratch that idea.  I thought I'd try making fish cakes - not the western style which is cooked flaked fish mixed with mashed potato, but the bouncy Chinese ones.
Fish cakes I did make, bouncy?  No.  Maybe its the wrong type of fish, maybe it doesn't have a gluey past- like quality to it that is needed for the bounce.  Maybe it wasn't beaten enough. 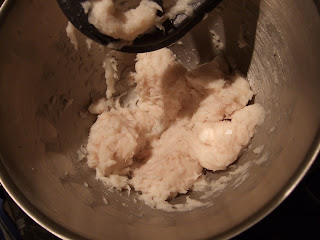 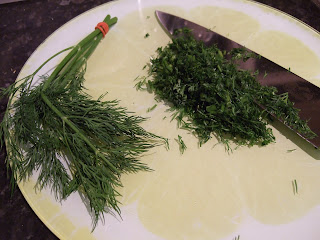 Not having a food processor, I skinned the fish fillet, then realised I should've just scraped the flesh off the skin and muscle with a spoon.  I did as best I could to break up the meat before mincing it with a large cook's knife.  I then placed the fish into the bowl of my mixer and added 4 Chinese soup spoons of water, some salt, white pepper and 1 tablespoon of cornflour.  I turned the mixer on to beat it for 10 minutes.  It turned into a smooth looking paste.  Next was 2 tablespoons of chopped dill and another mix.  The mixture was formed into small patties and fried in shallow oil until golden on both sides.  It wasn't too mushy, but it wasn't bouncy either. 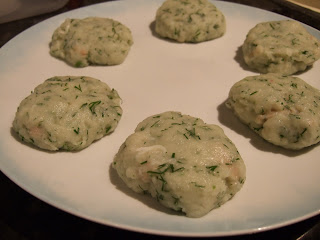 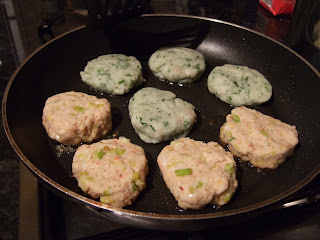 For the crab cakes, I had a vague idea of what I was doing from a Rick Stein episode (I can't recall which series) where he was making Maryland Crab Cakes.  Basically it's crab meat, crushed crumbs, lemon juice mayonnaise and seasoning.  I had a tin of crab meat, drained it (100 g) and to it, added 3 crushed cream crackers.  I seasoned and squirted about 1 tablespoon of lemon juice and a tablespoon of mayonnaise.  To make it more interesting I chopped up some spring onions and threw them in too.  A good ol' mix before leaving in fridge for 30 minutes to firm up.  Then they were simple formed into patties and gently fried until golden.

We ate our fish & crab cakes with new potatoes and salad.  Simple and that was our fish quota for the day. 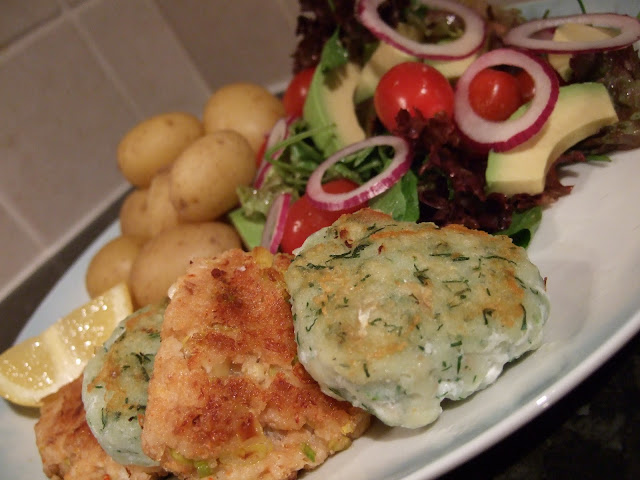