I've not yet baked this, but those who've read the previous posts on bread will understand 70% of this bread dough is started 17 hours ahead and left to prove in fridge.  (Edit: bread baked 03 Oct ~ photos and comments added below.) 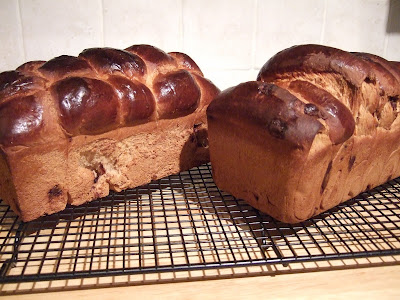 Dissolve the yeast in water.  Add bread flour, sea salt, skim milk powder and knead until soft.  Cover the dough in cling wrap.  Refrigerate to let it prove for 17 hours.

Filling
100g chocolate chips  (I used dark chocolate chips)
2 pc grated orange zest or glace orange peel  (I had a tub of whole candied clementines I'd bought from France a few years back.  I chopped one clementine for the bread (50g).  Next time I would double this as it disappeared in the loaf.) 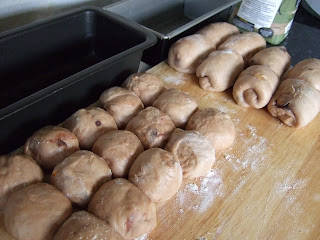 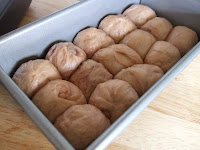 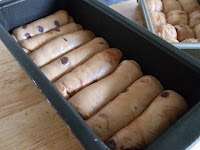 This is the recipe from Kin's book, Natural Breads Made Easy.  (天然麵包香 ~ 獨角仙@藍色大門.)  I am in the process of making this and will finish the post with my results tomorrow including any findings and photos.  :0)

I made a couple of boo-boos (a silly error - or in my case, THREE boo-boos,) when making this bread.  Firstly, when I had incorporated the pre-ferment dough to the dough mix, I thought the dough was too wet and sticky so I added a tablespoon of flour.  Then another and another.  I still had a sticky chewing gum type mass in the bowl - not elasticy and stretchy at all.  Then I realised I'd forgotten to add the butter, choc chips and candied orange!  The addition of butter usually makes the dough less sticky and easier to work with.  The fear of adding too much flour is that the ratio of flour to water is altered and can result in a tough, drier bread.

My second boo-boo was not greasing the loaf tins properly.  One has a non-stick finish so no probs there.  The other tin was probably not greased carefully enough and the sides of the bread stuck to the pan!

Now, I'm not entirely sure what I did wrong but the bottom of the loaves are indented.  It looks like the dough did not touch the bottom of the tin.  I don't know whether that was me not putting the dough in very well into the tins or whether I took the bread out to early to see if it was ready.  I baked as instructed for 30 minutes and tipped the longer loaf out to tap the bottom.  I was surprised to see the bottom of the dough did not touch the bottom of the pan and so was soft and spongy.  A hollow sound when tapped indicates the bread is cooked.  The breads were already looking rather browned on top so I lowered the shelf and turned down the heat a little.  I baked for a further 15 minutes.  This time I checked the shorter loaf tin.  This bread was stuck to the sides.  (Did I forget to grease this?)  Again it had a puckered base.  Into bake again for a further 15 minutes.  They looked finally ready although the bases still hadn't recovered fully.  Have not seen this before and not sure what had caused it.  Still sliced and tasted lovely.  Love the dark choc chips in the loaf but I'm not sure where the candied clementine went?  I would add another candied clementine next time and go easy on adding more flour.  The bread has a good chew to it may be a result of the flour I was adding.   Maybe you'll do a better job than I did!

My blog friend Everybody Eats Well In Flanders made this in tandem this weekend as I posted the ingredients and recipe before I completed the loaves so she could bake it too.  Her hand-held mixer died on her in the process but she still made an excellent loaf.  Her version she called Orange Marmalade Loaf as she omitted the chocolate chips.